I was in Borders Books perusing the high end auto classifieds in the DuPont Registry looking at all the wonderfully exotic and classic cars people have and the enormous price tags on some of those beauties.  One of the ad pages in the magazine caught my attention with a body style I had never seen before called an STV.

They termed it the Shadow Hawk Super Terrain Vehicle.  The company hand builds each one to custom specs at a rate of 12 per year and it seems like the desert model would be the ultimate “survivor vehicle”.  🙂

I was driving along in New York City the other day… no, that is not the WTF… anyway…

I was stopped at a red light when I happened to look over at the garbage truck beside me. WTF?

What’s the story behind the plaid shirted, child sized doll strapped to the under-fender of a garbage truck?

Other interesting things I’ve seen this past week in which I do not have a corresponding photo to show is a mailbox shaped like a small block Chevy V8 (Maine).  I’ve also passed one of those fish shaped mailboxes with a rope tied to it’s tail that led to a “stick fisherman” silhouette a few yards away as if it was catching the fish-box (Delaware) — that one made me laugh out loud for a good five minutes.

I’ll be posting more when I can find the friggen photos.  I have filled up an 8gig card and working on another 2gig one.  That’s about 1500+ pics with a few videos tossed in the mix.

I was flying the other day, practicing a long distance, cross country flight plan with my instructor in the copilot’s seat when we came upon my next landmark used to make sure I am still on my planned route.  On the air chart, it’s simply listed as “stacks”, but upon seeing them in person, my first thought was “nuclear power plant”. 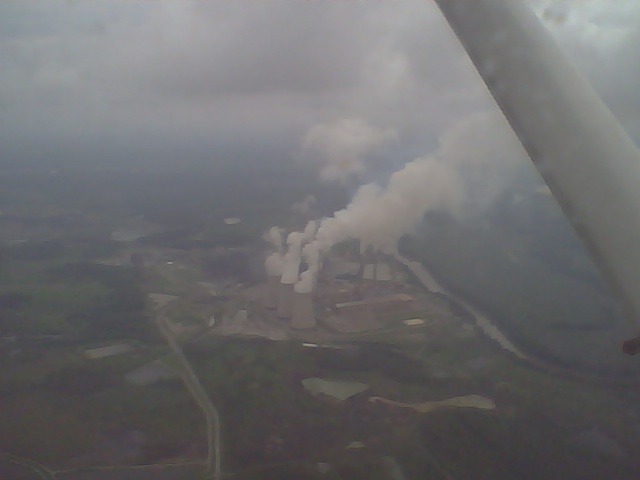 What kind of power plant?

I pointed them out to my instructor and asked him if it really was a nuke site and he said “If that were true, we wouldn’t have been allowed to fly near it.”  What on earth could it be with water cooling towers like that?  It had a rail yard like a coal plant, but the cooling towers and the nearby river seemed to tag it as a nuclear power design.  It was a mystery for sure, one that had to be looked into later.

After returning home, I decided to find out where that power plant was located and whatever story was behind it.  Since air sectional maps are on a scale of 1:500,000, many small locations are omitted.  I scanned the satellite maps on Google until I found what I was looking for.  As it turns out, this is a semi-famous power plant.  It was one of the largest coal powered steam power plants in the world when it was built in the 50’s, has a song written about it, and even grew it’s coal strip mining earth-moving operation so large as to wipe the town of Paradise off the map… literally.  The nuclear-like water towers exist as part of the sulfur scrubbing process to help clean up the “dirty” coal being used from the surrounding area.

Seeing the area from the air shows the kind of scar such operations create and leave behind. 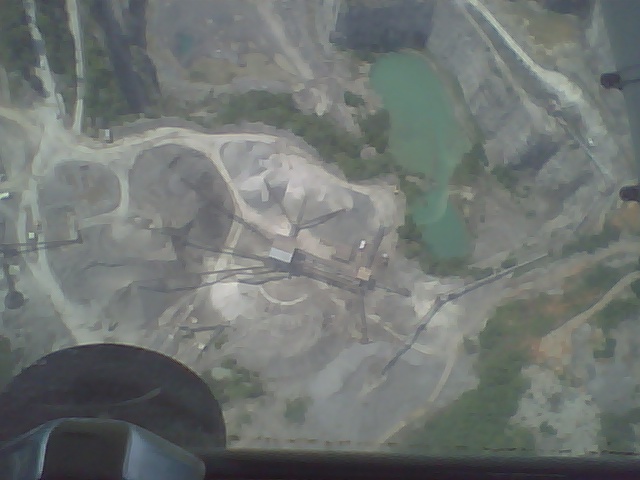 Sgt. Dick Beaver, a member of the same Army company as my brother.  He’s quite a character!

Gottfried Gottfried XVI, also a member of my brother’s company.  Not only is it unusual, but there were 15 generations before him back unto the American Civil War.  He did not name his son Gottfried, thus breaking the line and causing him to be disowned by his family for it.

Latawata Rd. (sound it out loud) is the first offramp after a very long bridge over a lake along I-40 near Checota, OK.

One of the long, main, back roads through town is named Needmore Rd.  At about the halfway point, there is a very short connecting road named Needless Rd.

A small neighborhood being constructed nearby named Camelot Hills and it’s only street is named Arthurs Ct.

I’m lying in bed this morning slowly realizing my dreams have faded and the day has begun.  The fact that the house is still silent means my radio alarm has not gone off yet and I do not stir to get up – no need to rush out of bed.  My mind drifts over the fading dreams and I start mentaly singing one of the pop songs my neices love to listen to – not necessarily a great song, but it’s played so often it gets stuck in your head.  What is strange is that when my radio alarm turned on while I was stretching off my sleepiness, that very song was being played and it was exactly on the spot where my mind was replaying the song as if I was just listening to it before it switched on.